A digester system was neither getting to the correct operating temperature or transferring sufficient heat to the sludge. The digester was running at 29oC, but should be 35 – 36oC, in addition the transfer rate to the sludge was only 3 – 4oC. At first Yorkshire Water(YW) thought the problem maybe with the pumps, the pumps were renewed, but this did no solve the problem, it was then decided that due to the local hard water, that the system must be scaled up.

HSL Eco Descale was circulated around the system to de-scale it.

The system was drained and a HSL Eco Descale mix of  50% water 50% DD was pumped into the system.  The system is meant to hold approx 400 litre of water, however during the de-scaling process approximately 120 litres was added to the system as it was de-scaling, this meant the system had lost approximately 25 – 30% of its capacity due to scale on the pipe work. The HSL Eco Descale was circulated for 3 hours, and then flushed out prior to being placed back into use.

After the de-scale the system was achieving temperatures of 35oC even during low winter temperatures ant the sludge transfer was 10oC. YW described this as a complete success. 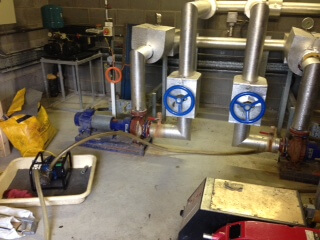 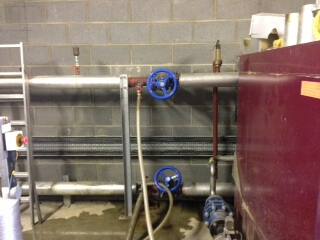